One Million Years Of Laughter 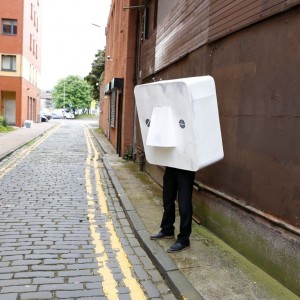 One Million Years of Laughter is a new series of performances and paintings finding humour in the contradictions that exist within commonplace actions and experiences. Using what is known about the early ‘Homo’ as the basis for this body of work Sherry looks at, even before the evolution of language, their use of laughter as a bonding mechanism.

Sherry throws the idea of acting the fool into a practical sphere. To think of early humans sitting around laughing is a source of comedy in itself, yet to this day, it has evolutionary benefits. Humour is often thought of in philosophical terms but its importance also lies in how we engender strong connections and manage our time efficiently.

Public performances have a long and poignant tradition and can be viewed as a gesture of social cohesion, expanding upon the relations and meanings of who we are. Sherry uses these moments to offer observations, reflections and laugher whilst his paintings work in conjunction, functioning as an anthropological thesis, looking at modern society from an archaic perspective, and rendering the banal with a fascinating hue.

NB. David Sherry will hold performances at Summerhall, and as part of Edinburgh Art Festival 2015 – three in St. Andrews Square.