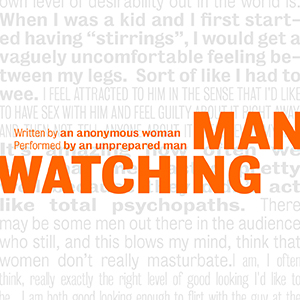 Written by an anonymous woman
Performed by an unprepared man

A funny, frank, and occasionally explicit insight into heterosexual female desire, read out loud by a man.

Each show begins with a male comedian being given a script they have never seen before. They will read the script for the first time, out-loud live in front of an audience; all about what one woman thinks about when she thinks about sex and men.

This piece is a work-in-progress being piloted at the Edinburgh Festival. It is being developed in collaboration with the Royal Court Theatre.

Five performances as part of EARLIER/LATER, a series of early morning and late night one-off shows programmed by Paines Plough.